The mission of this project is to produce and record a live concert that will be artistically and economically successful so that all the proceeds can go to benefit the Alive Inside Foundation, with whom we are partnering, to provide music therapy for people with Alzheimer’s.

Janis Mann is an award-winning, nationally recognized jazz vocalist who has seven successful CD recordings to her credit.  She is also an accomplished producer of concerts and recordings and has performed with some of the greatest names in jazz.  She produced a similar concert/recording project while living in Seattle and raised $20,000 for the Swedish Hospital Breast Care Center there. For more info: www.janismann.com

Kenny Werner is one of the most respected pianists in jazz and his book “Effortless Mastery” has inspired countless musicians around the world.  He is currently head of the Effortless Mastery Institute at Berklee College of Music in Boston.  He tours worldwide and his numerous recordings are esteemed for their imagination and artistry. For more info: www.kennywerner.com

Larry Koonse is a guitar wizard who has few equals.  Kenny Werner says he is the most intuitive guitar player he has ever worked with.  Larry is a first-call player for concerts and recording sessions throughout the world. For more info: www.larrykoonse.com

The concert will take place on Sunday, Sept. 22, 2019, from 11 a.m. to 2 p.m. at Capitol Records Studio B in Hollywood, CA.  Fifty seats at $125 each are available for audience members who will not only be participants in a historic recording event but, with the purchase of their tickets, be donating to an exciting and worthwhile charitable organization – the Alive Inside Foundation. Concert-goers will also receive a signed copy of the CD when it is released.

Food and drink will be provided at this brunch-hour event.

The concert will be recorded by master engineer Talley Sherwood on-site at Capitol’s Studio B with a live audience.  After editing, mixing, mastering, and duplication a CD will be released on the independent Pancake Records label with attendant promotion and publicity to raise awareness of the charity and ensure generous sales to benefit Alive Inside. All CD sales monies will go to Alive Inside.

Concert proceeds and additional sponsorships will underwrite the costs of production so that the Foundation benefits from all sales.  Any excess funds generated will likewise go to the Foundation. 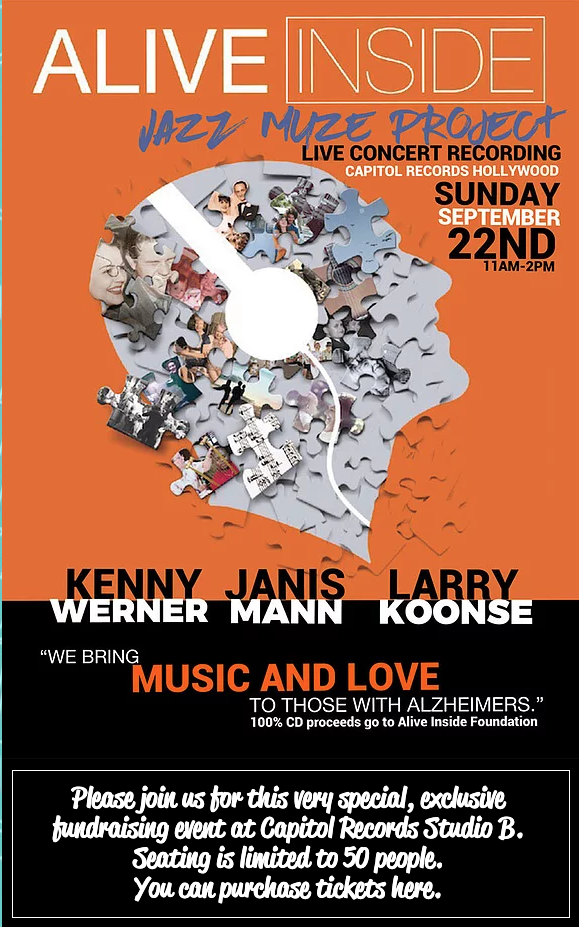